Crate training is something that still, even now, provides mixed opinions. Some people still see the crate as a cage or even a trap of sorts and prefer to steer clear whilst others 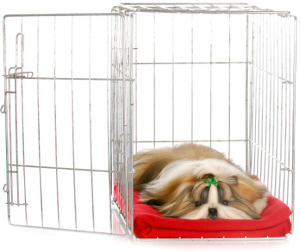 embrace the dog crate as their Shih Tzu’s useful bedroom full of toys and coziness.

In reality the dog crate can be either or both of these things, depending on how it is used, read on for more information.

How Not To Use a Shih Tzu Crate

I read a book recently that talked about pushing a dog into a crate and leaving him there until he stopped scratching and barking. I believe that this is a terribly unkind thing to do. In that particular scenario the crate has indeed become the dog’s cage, I would even go so far as to say prison.

Using a Shih Tzu crate in this way will cause stress, panic and fear. The approach of pushing the dog in and shutting the crate door may even cause crate phobia for the rest of the poor dog’s life.

That said, the home with a Shih Tzu crate in is actually really good for the dog, read on to see why.

Crate Your Shih Tzu With Kindness

Used carefully the Shih Tzu crate is a place where the dog wants to be, sometimes. He will hop into his cozy bedroom for his goodnight biscuit because he knows that this is where he sleeps.

The crate is somewhere that your Shih Tzu can go if he is worried or just wants to take some time away to nap. It should be the place where he knows he can hide away if he’s not interested in interaction for a while or the place he goes when there is a storm outside.

The dog crate should have a comfortable bed, a cozy blanket, some toys and even a drink inside it. If your Shih Tzu is not fully housetrained then a puppy pad is also a good idea. Make the crate the equivalent of an older child’s bedroom, your Shih Tzu will love it.

Getting Used To The Crate

Teaching your Shih Tzu that the crate is the place where he can truly relax is quite easy.

Crate size is debatable. Some people state that for toilet training the dog should be in a snug space. I have my small dog in a huge crate at night, it’s like his own doggy apartment and he loves it, as long as your Shih Tzu can move around then this is fine, although I like my own dog to have plenty of room.

The most important thing to do in the beginning is to have the crate near you so the dog learns that sitting or lying in it does not mean that he is completely alone. Later on you can move the crate somewhere else, into a more permanent position but the closer it is in the beginning the more likely your dog is to relax in it.

Invest in a treat dispensing toy and pop it into his bed in the crate and throw treats in and allow your dog to hop in and out of his new bedroom. You can even feed your Shih Tzu in the crate if you like and gradually progress to closing the door only when your dog is relaxed in the crate.

Crate training Shih Tzu is all about giving your dog a bedroom that he can relax and feel good in.

Psst... “Hey, did you enjoy this article or have a question? I'd love to hear from you! Please click LIKE, and leave a comment below to let me know!"

Sign Up Here To Get Your FREE Customized Shih Tzu Info-Kit!

You can also connect with me through Google+
What People Are Saying:

"Your input are a big help in raising my Bella, she is a wonderful dog and a big part of the family. Her b-day was last month and she ate all of her cake(cup). We have a 6 year old daughter and another baby coming in January of next year, so Bella will have playmates. Thank you for everything and hope to hear from you soon.


"I love getting your newsletter! I adopted Millie last January from a local shelter. She was 2 years old and rescued from a hoarding situation. It took several weeks for her trust for me to kick in,, but once it did, her little (big) personality came out......slowly but steadily!!!! She is a great company and companion!

It’s been almost 10 months since we were 'matched' up and its been a wonderful experience. I've always like a little bigger dog, and didn't know anything about Shih Tzu's, but I knew I wanted a small, sturdy lapdog. She has been an amazing joy and I love her to death!!! Thank you for your emails and the information you send out. Some of it I haven't used, some of it has been a GREAT help and some of it has been very useful! Thanks again."


"I love your Information! I am truly looking to buy a teacup Shih Tzu. And your newsletter is helping me learn about the breed in general. I have owned three Shih Tzu’s in the past one female and two males. So I'm trying to do it the right way this time. You have given me valuable information already. I feel as though I better understand the breed behavior now, and I will be better educated to train my new family member."

Thank you! Please check your inbox to confirm your subscription.
Loading...